WikiIran
The Tragic Shooting Down of the Ukrainian Plane by Iran's IRGC
Iran's IRGC shot down a Ukrainian civilian plane last year and killed 176 innocent passengers. Instead of expressing regret and sorrow, the regime first denied its involvement in this act of terrorism, however, the increased international pressure forced it to acknowledge IRGC's responsibility. Below you can read the full story of this tragic incident and regime's involvement
By
Sharon B.
/
March 2022 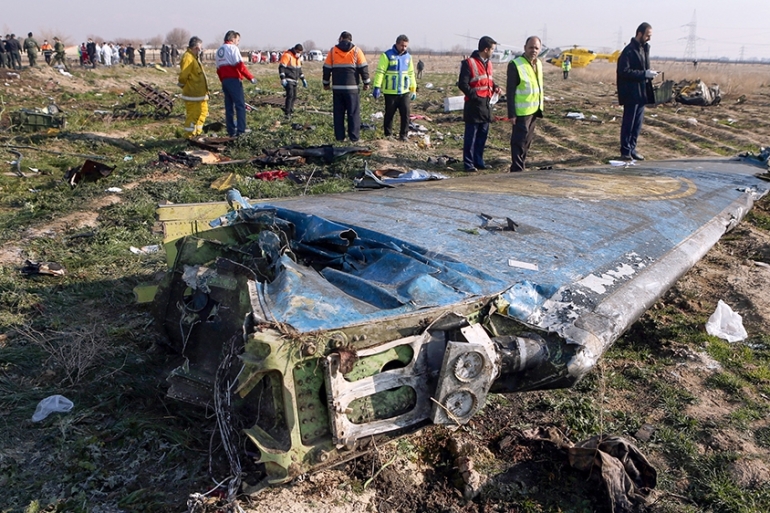 Flight 752 was a Ukraine International Airlines passenger flight from Tehran to Kyiv that was scheduled for January 8th, 2020. The flight was one hour behind schedule; the aircraft took off at 06:12:08 (UTC+3:30) and was expected to land in Kyiv at 08:00 (UTC+2:00). Shortly after takeoff from the Tehran Imam Khomeini International Airport, the aircraft was shot down by the Iranian Islamic Revolutionary Guard Corps (IRGC). All 176 passengers, including fifteen children and nine crew members, were killed. Of the 176 passengers, 82 were Iranian citizens, 63 were Canadian citizens, ten were Swedish citizens, four were Afghan citizens, three were British citizens and three were German citizens. Eleven of them were Ukrainian, nine of them being crew members.

At the time of the shooting, the Persian Gulf was in a state of heightened political crisis following the assassination of IRGC's Major General Ghasem Soleimani by the United States. Iran retaliated by launching ballistic missiles towards U.S. military bases in Iraq and was said to have been in the highest state of defensive alert and preparedness for war.

The flight was hit by two short-range missiles that were launched thirty seconds apart, just as it was ascending. This is based on an analysis of videos obtained by the New York Times, which showed that after the first missile hit, the aircraft still maintained its track but upon being hit by the second missile, it veered right and burst into flames. The pilots are believed to have been killed instantly by shrapnel from the missile, since it exploded near the cockpit.

The aircraft crashed at the edge of the village of Khalajabad, with no casualties on the ground. There was an emergency response immediately after the crash with the arrival of 26 ambulances including four bus ambulances and a helicopter. However, rescue efforts were deterred by intense fires with wreckage scattered over a wide area. The aircraft was destroyed completely on impact with no survivors at the crash site.

Following the missile attack, a notice was issued by the U.S. Federation Aviation Administration (FAA) to airmen banning all American civil aircrafts from flying over Iran, Iraq, the Persian Gulf and the Gulf of Oman. The notice was also heeded by other airlines from Australia, Sri Lanka, India, Singapore, France, Malaysia among others who began re-routing their flights. Other airlines, such as Lufthansa, Flydubai, Turkish Airlines and Emirates, cancelled their flights to airports in Iran and Iraq.

The cause of the downing of the flight was not established easily at first, with one of the main speculations being mechanical failure. However, the airline refuted this claim stating that the aircraft had been under inspection two days before the flight. Denial by Iran also made it difficult to establish the true cause of the crash in the beginning. Iran firmly denied responsibility initially but investigations were able to point out that the flight had been downed by two surface-to-air missiles.

Immediately after the crash, the Civil Aviation Organization of Iran (CAOI) reported that they had sent investigators to the site. Ukraine also reported that it would send a team of experts while the President of Ukraine instructed the Ukrainian prosecution to open a criminal investigation. The US and France sent investigators to represent the manufacturer of the aircraft as well. CAOI noted that it hadn't received any emergency message from the aircraft. The black boxes were recovered but Iranian investigators reported that they had been damaged and therefore, some parts of their memory might have been lost. A media report from January 9th showed that bulldozers were used to clear the crash site. Iran denied this claim.

The first evidence to point towards a missile strike came from a leaked recording by the Ukrainian public TV in which there was an exchange between an Iranian pilot and an Iranian traffic controller. The pilot stated that he saw a series of flares similar to those of a missile. The leak led the Ukrainian President to argue that since the beginning, Iran was well aware that a missile brought down the aircraft. Following this, Iran ceased its cooperation with Ukraine in the investigation and only resumed after nearly two weeks.

A proposed class-action suit was filed against Iran, the Supreme Leader and several branches of the Iranian military among others in February of 2020 in the Ontario Superior Court of Justice. The families of the Canadian victims are seeking compensation of at least CA$1.1. The families of the victims formed an association in April of 2020 to follow the case through the legal avenue. IRGC tried to refuse to compensate the victims of the crash despite admitting that it had shot down the civilian aircraft. On August 10th, 2020, IRGC Officer Gholamreza Soleimani said that Iran would not compensate the victims because the aircraft is insured by European companies in Ukraine and not Iranian companies. On December 30th, 2020, Iran announced unilaterally that it would allocate $150,000 for each victim's family. After the ruling, the Ontario Superior Court established that the shootdown was an intentional act of terrorism, and the court awarded the families of six victims 107 million dollars.