WikiIran
Severe Human Rights Violation On Iran's Nuclear Talks Program
While the world is focused on the possible success of the Vienna nuclear talks, the Iranian regime has intensified its violations of human rights and repression of free speech
By
Andrew R.
/
March 2022 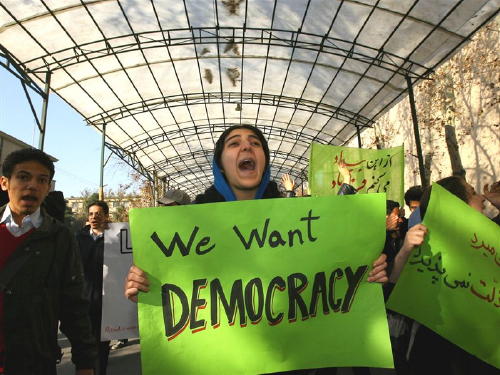 In recent months, human rights observers have reported a crackdown against free speech in Iran, with excessive force used against protesters and torture in detention.

There has been a severe increase in the arrest and imprisonment of various human rights defenders. Lawyers, scientists, environmental activists, artists, women’s rights activists, and trade unionists have all been victims of this injustice, according to the Amnesty International.

This is just part of a growing trend of human rights violations in Iran, as the regime becomes more comfortable using violence against its citizens in order to protect its interests. Success in the Vienna nuclear talks threatens to absolve these sanctions, the only thing somewhat limiting the regime’s behavior.

“We cannot sacrifice human rights at the mantle of the nuclear negotiations with the Islamic Republic,” said Hadi Ghaemi, executive director of the Centre for Human Rights in Iran.

Iranian authorities severely restrict the freedoms of assembly and expression, according to Human Rights Watch. Over the past three years, security forces have used “excessive and unlawful force” in response to street demonstrations and peaceful protests of all kinds, which have been widespread due to the perilous state of the Iranian economy.

On July 23rd, 2021, Amnesty International issued a press release condemning the use of deadly force against peaceful protests in the southwestern province of Khuzestan. Security forces used deadly automatic weapons, shotguns with inherently indiscriminate ammunition and tear gas to disperse protesters, resulting in the deaths of at least eight people. Scores of surviving protesters were arrested.

Access to independent news media and social media has been severely restricted. Since 2019, when the Iran regime shut down the country’s internet completely, measures to entirely control the web have been under consideration. Now, a bill to further increase governmental control over the Internet is on its way to being approved by the Iranian parliament.

Arrest and torture of journalists

At least 860 journalists and citizen-journalists have been prosecuted, arrested, imprisoned and, in some cases, executed since the 1979 revolution. Reporters Without Borders rates Iran at 174 out of 180 on its 2021 World Press Freedom Index.

The prosecution and jailing has continued. On February 16th, authorities arrested photojournalist Noushin Jafari and transferred her to Qarchak prison to serve a revolutionary court sentence for charges of “spreading propaganda against the state” and “insulting the sanctities.” Journalists and media activists currently in prison include Keyvan Samimi and Aliayeh Matlabzadeh, the chair and co-chair of the Society for Defending Press Freedom.

These journalists are routinely sentenced to ’80 lashings,’ a particularly brutal form of torture. At least 15 journalists were imprisoned in Iran at the end of last year, according to the most recent prison census data from the Committee to Protect Journalists. Four journalists have died in Iranian prison since 2003.

Often journalists are charged with national security crimes, which has serious ramifications for press freedom, said Yeganeh Rezaian, a senior researcher for CPJ.

“There has been a worrying trend this year of imposing extreme sentences against prisoners of conscience such as human rights attorneys Nasrin Sotoudeh who has been sentenced to a total of 38 years in prison plus 148 lashes and Amirsalar Davoudi, who has been sentenced to 30 years in prison and 111 lashes for his human rights work, including publicizing violations through a channel he set up on the Telegram mobile messaging app and giving media interviews,” the organization announced.

“The Iranian regime’s policy for ethnic minorities is based on racial discrimination, assimilation, linguistic discrimination, religious prejudice and inequality, brutal oppression, deprivation and exclusion of the people who are the majority in their own respective provinces and regions,” comments Abdul Sattar Doshouki, director of the London-based Center for Balochistan Studies.

Students across Iran have been protesting the requirement to be physically present when taking their exams. With COVID-19 raging across the country, the students maintain that holding tests in person is unsafe and have taken to the streets to make their point.

“Unfortunately, in some cities, such as Qazvin, Yazd, Foulad-Shahr, and Isfahan, the police resorted to violence to break up peaceful student gatherings,” the Iranian Teachers Trade Association said in a statement on May 8, 2021.

It added: “Using force, pepper spray and batons to intimidate and arrest students and underage youths is a shocking violation of humanitarian and civil behavior. It is wrong to use violence to deal with such simple gatherings when the authorities should instead be engaging in discussion and teaching students how to behave in a civil manner.”

In a joint statement released on February 18, nine human rights organisations, including the Center for Human Rights in Iran (CHRI), urged the governments negotiating a resumption of the nuclear agreement with Iran not to lift any human rights sanctions on the Islamic Republic. There was a specific demand for maintaining human rights sanctions on Iranian President Ebrahim Ra’isi for what they called his “personal responsibility for egregious human rights violations.”

This review of the Iran regime’s repression does not come close to the entirety of the violent offenses committed against human rights. The regime seems to have become more willing to resort to violence than before, and far more inured to criticism. Reaching an agreement at the nuclear talks will remove sanctions, relieving any pressure on the regime to change its ways. It is worrying to imagine what the future may hold for Iranian citizens living under such a government with no limitations.